As I mentioned earlier, Gee and I have never experienced cold like this before, this is truly bone chilling cold for us. But did it stop us from doing things? Ummmmm… No!

So after returning from Barcelona, we got stuck into settling down in our new hometown:

I have to be honest, if I’m going to be this cold, I much prefer if it snowed. So we got in touch with our friends in Frankfurt (who we met while we were on our honeymoon in Vietnam) and went to Frankfurt in early February. Frankfurt as a city was a bit disappointing, but we had a great time, thanks to our lovely friends. The highlights:

After our magical snowy experience, it snowed in London once we got back. I have to admit, it wasn’t as magical because of London Underground delays and not to mention slippery shoes.

After a fortnight we decided that we needed to explore our own backyard as well so we took a trip to York where (yep) it snowed! 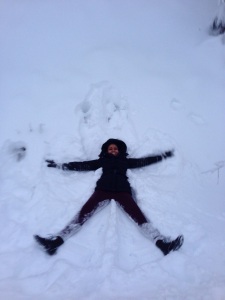 I understand if  you don’t share our enthusiasm for snow, but you have to understand that neither of us have ever seen so much snow before. PLUS, there is something magical about snowflakes falling from the sky.