December the 1st. the start of the Advent calendar. The time when it is acceptable to put up the Christmas lights, start panicking about Christmas shopping and start eating mince pies (the last is acceptable all year round if I can find it).

We started off our December truly with a bang – or shall I say a deep bass of electronic music – in the company of brothers Howard and Guy Lawrence, candidly known as Disclosure at Ally Pally. I should mention that we don’t personally know the brothers, but I thought I’ll take some creative writing liberties. Famous for their hit single Latch feat. Sam Smith, the boys were also a feature on our wedding video and hold a special place in our hearts. Mrs FOMOist and I saw the boys perform in Australia a couple of years ago in a very cosy venue and were determined to see them on their home turf, and they were as brilliant as we had hoped.

It was a school night (Tuesday) and the gig was supposed to end by 11.00pm so we were ready for a night of great music and enough sleep to make it back to the office on Wednesday morning. Disclosure currently have two albums out and in my humble opinion, the first one is much better than the second – which has gone a bit too mainstream. I would say the crowd shared my thoughts, given the level of enthusiasm between the old and the new songs.

If you live in London and haven’t been to Ally Pally for a gig, I think you need to put it on your to-do list. Alexandra Palace is an iconic north London venue with spectacular views of the London skyline. In addition to the location, the venue itself is ginormous with a space to host an indoor street food market, before you enter the main mammoth arena with brilliant acoustics.

Before I end my rant about the gig, I would like to give a shoutout to the crowds. When booking the event, we had anticipated the crowd to be young-er, but didn’t really expect the level of naivety. Scantily clad lasses with dopey eyed boys having a few too many drinks (among other things), resulting in trials, tears and tribulations, even before the start of the gig at 8.00pm! As one of our friends rightly pointed out – the youth is wasted on the young (or we are just bitterly jealous).

The weekend started with a morning (after midday to be honest) stroll around our local Maltby Street Market. I really do like these markets, but have never been there on a nice sunny day and this visit was no exception. Due to the narrow lane, it’s often a wind-tunnel to walk through. Despite the wind trying to sweep us off our feet and temperatures that felt at least 3° degrees cooler, we walked the length of the market, enjoying our fresh brews with savoury pastries, followed by really yummy macarons. I should do a better job of remembering the name of these places,  but if you visit the Maltby Street Market, you’ll realise they’re not that big and you won’t be disappointed regardless of what you get your teeth sunk into.

In addition to fireworks, I am a huge fan on Christmas lights. I am not talking about Disney sponsored lights at Oxford Street trying to push their latest film, but the ones that people put up in their houses. When an entire street joins forces to share the spirit of Christmas. This fascination and appreciation for Christmas lights started in Auckland, NZ, where there is a street dedicated to Christmas lights. Franklin Road (and its inhabitants) are known for lighting up this 15-min walk with the best Christmas lights I have ever witnessed.  So when I heard about Christmas at Kew Gardens, even though not the same, I was looking forward to the off-the-high-street starry Christmas spectacle.

Christmas at Kew was our first time at Kew Gardens and while it was pretty, it was neither extremely Christmassy nor worth the £16 we paid. Don’t get me wrong, I did enjoy every minute of us walking through the dimly lit trees and ferry lights showering from the sky, but with the name like “Christmas at Kew”, I expect Mulled Wine carts in every corner, Christmas music and at least one Santa somewhere. 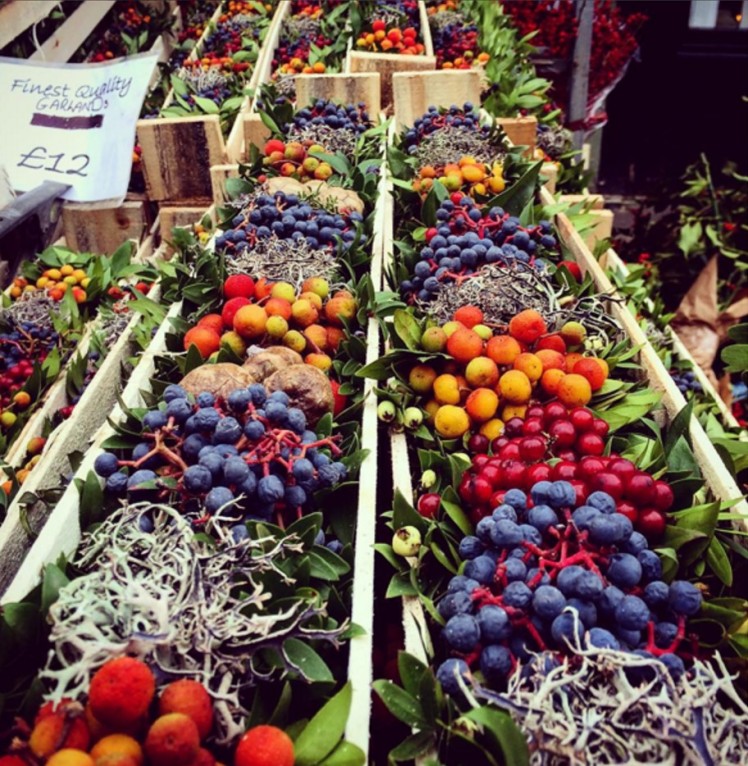 To keep up the Christmas spirit we decided it was the perfect weekend to go visit the Columbia Road Flower Market. If you are a Londoner you have probably frequented Columbia Road Flower Market at least once and if not you have probably most likely heard of it and always wanted to go…if you still haven’t made the leap, this time of year is perfect with the street lined with vendors selling Christmas trees, wreaths and all types of blossoming goodness. 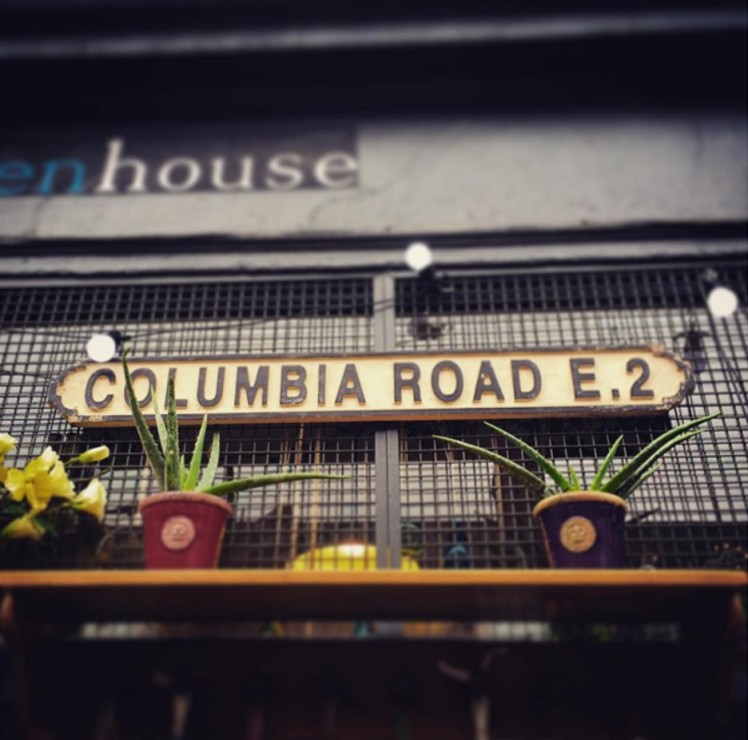 We started off with breakfast at a café called S Jones. The food was simple but incredibly delicious. My meal of poached eggs with wilted garlicky spinach was truly divine and Gee looked pleased with her choice of olive oil eggs (friend eggs on toast). It sounds simple, it was simple, but simply delicious! After finishing our breakfast, we braved the crowds at the markets. Vendors yelling cheeky comments at a mix of window and actual shoppers. Looking at all these wonderful colours of nature, we caved in and bought our very first Christmas wreath. Living in NZ and Australia, buying a wreath is not something that occurred to me, but I feel like a tradition coming along. 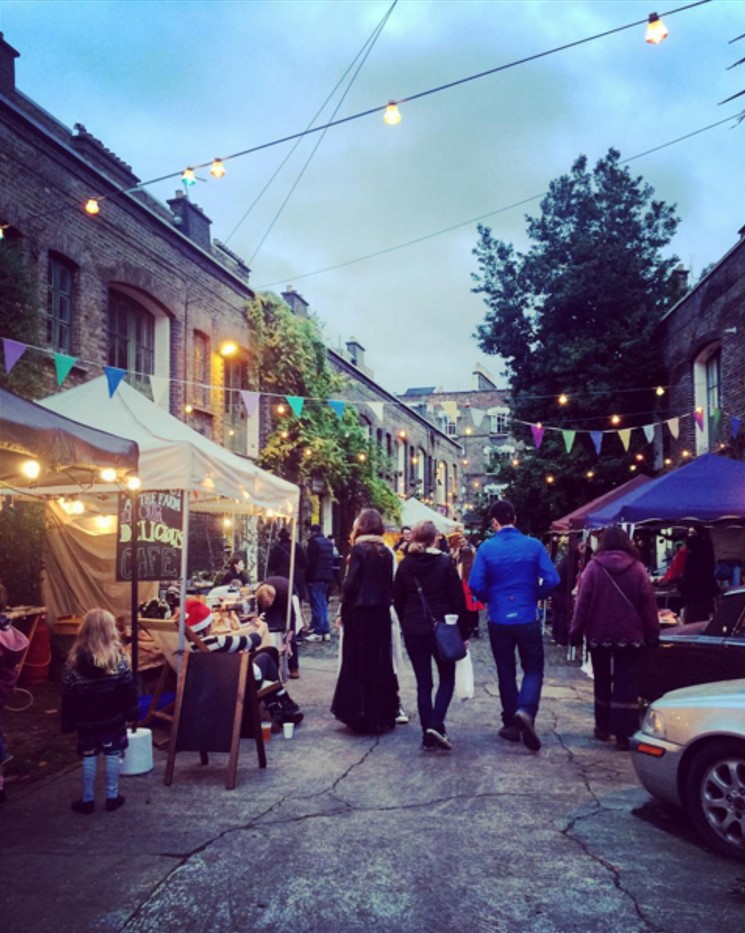 Our final destination for this Sunday evening was the Pullens Yards Open Studios. The Pullens Yards, based in the heart of London contain unique 1870′s live / work spaces. The studios only open a couple of times a year and were open this weekend. As one of our friends put it – it was all about craft beer, food and arty shit. Casually chatting to these incredibly talented individuals who beaver away in these tight little studios, producing remarkable and unique pieces that I can only dream of owning.

This post might seem like any other, but it is extremely special. Exactly a year ago today 07 Dec 2014, Mrs FOMOist and I arrived in Londontown,
with a suitcase and a hand-carry each. Since then we have made London our home and living our lives exactly as we had planned to. Not many people get to do it, but both of us are truly living the dream and I am thankful to have Mrs FOMOist as my partner in crime.

Thanks for being just as crazy as me sweety, I love you.