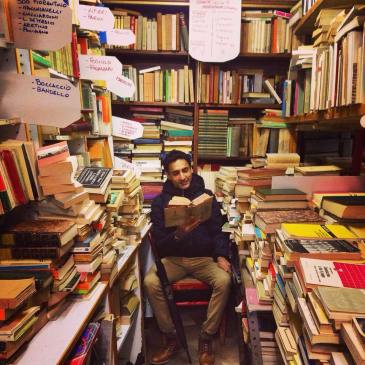 I like big books and I cannot lie. I just wanted to write it, I do like books in all sizes.

I am no literary expert, but in addition to traveling, dreaming about traveling and trying to do too many things in a short span of time, I also like to read.

Books are like magic folded inside the folds of paper, waiting to be experienced. The stories within a book can take you to places you never thought existed, places you’ve always to explore or relive the memories that you may have long forgotten.

The aim of this page is to create a list of books that I have read and thoroughly enjoyed so I can pass on the magic to my friends and family.

Currently lost in the magic of – American Decameron by Mark Dunn

A Spool of Blue Thread by Anne Tyler

The book is about a family that may seem ordinary, but like any family, it is extraordinary in it’s all special way. While I was reading this book, it made me feel like I could be sat with my granny, who one day decided to lay down the story of our lives in front of me. The Whitshanks have the tangled threads of complications running through their relationships, but the more they try to break-free, the more they get tangled, and I have a feeling they all just might secretly like it. Putting it simply, this book has been the best family-drama I have “seen”.

The Field of the Cloth of Gold by Magnus Mills

This is my first Magnus Mills book and I am not going to lie, I did struggle a bit to get through it. I am a details oriented person and the book is set somewhere, in some period and has a river of some length. The concept of time within the book goes from fast-forward to slow motion from page-to-page. However, the story-line that focuses on territorial human nature and evolution is witty. So if you’re into a funny book but don’t get too stressed out about things that irk me, then you’ll definitely chuckle your way through it.

The Fisherman by Chigozie Obioma

A tragically beautiful tale of four brothers growing up Nigeria. The story is told from the perspective of the youngest brother Benjamin. Like many African novels, the book creatively toys with the English language by mixing it with colloquial slang. My one takeaway from the book was the power of mind over matter. The book starts with the brothers going out on fishing expeditions without their parents’ knowledge and ends with the brothers’ lives destroyed by their belief in a madman’s prophecy.

I must be living under a rock because this is the first Murakami book I have read. It’s a beautiful love story, not only between a boy and a girl but between life and death. I love the way Murakami describes each and every detail in the book, pulling at ones heartstrings hard to feel the pain, joy and ecstasy of life.

Computers, algorithms, time travel, sorcerers, magic tricks, love and revenge – this book has it all. It’s a delight to get lost in the fantasy world of time travelers trying to save themselves from themselves.

The Secret History by Donna Tartt

It’s a peculiar story of Ancient Greek students pushing the boundaries of learning and putting the learning into practice. At times it turns a bit Game of Thrones and left me a bit haunted.

The Thought Gang by Tibor Fischer

A very non-philosophical tale of an unemployed philosophy professor who befriends a handicapped robber and goes on a bank robbery spree with his new found friend in France. It’s clever, funny and engaging. It is a surprise that no one has picked up The Thought Gang to make a movie.

This book is a real treat and not something I would pick up at a bookstore. It’s a story about a town struggling with the ever diminishing letters of the alphabet. What is the now-popular “txt speech” was mandated? What if you could get banished for using the simple letters of the alphabet that we take for granted? Ella Minnow Pea is a story of such town and is one of the most clever linguistic marvels I have come across so far.

This book was a bit of a slow burner for me. The book is about a boy based in a Western Australia town called Sawyer, so I particularly enjoyed reading the Aussie lingo out loud (usage of the word “dick” were plentiful). It’s a well written story but I do believe it could have done with a better editor. It starts off with one story, which you think is the “plot” but then nothing happens for about three-quarters of the book and then suddenly the plot shifts, the pace quickens and at the end of it you’re left longing for more of the second (the better plot). In summary, if you start this book, persevere through it, it does change course dramatically and for good reason.

The Night Circus by Erin Morgenstern

“The circus arrives without warning.” That this the first line of this truly psychedelic book that I recently finished reading. It is mesmerising, magical tale of a boy and a girl bound to by a challenge that can only be conclude with the life of the defeated. The venue of the so-called challenge –  Le Cirque de Rêves. This is a book that will make you want to believe in magic, because without it, life is all but bland. It’s the circus that you would never want to leave and the one you can only stay in until the sun rises. This is a book I am already looking forward to re-reading, even though I have just finished.

The Chess Machine by Robert Lohr

The debut (and the only) book written by the screenplay writer Robert Lohr, The Chess Machine is an extraordinary story of hunger for fame, thirst for life and struggle between devotion and deception. Baron Wolfgang von Kempelen is well regarded by the Queen of Austria, but he longs for more. In his quest for fame and fortune, the Baron designs chess-paying automaton known as the Turk. But how can a machine play chess in 1700s you ask? It can if there is a chess-playing genius dwarf is operating it on the inside. It is not the kind of book that I would have ever picked up from the shop floor, but I am glad I was recommended this timeless epic. At the end of it though, I did feel like I missed out on checking out the Turk in Vienna.

I haven’t been an avid reader for long, but this is the book that started it all for me. Based on a true story, it is an epic narrative of an ex-Australian convict, who escapes the highest security prison in Victoria and finds himself in the beautifully colourful and horribly intimidating streets of Bombay (as it was known back then). Once in Bombay, Gregory settles in the slums of Bombay, first as a local doctor because he was carrying a first-aid kit and then ends up joining the mafia that takes him all the way to Afghanistan. For me, the power of the book comes from the vivid description of the adventure that you can sense, taste, touch and smell. It is an intimidating book to look at with 944 pages, but so addictive that I ended up reading it twice (for now).

Also famous for the 1990 American psycho-thriller of the same name, Misery is a story of when admiration turns into obsession. Paul Sheldon is a renowned author of books that Annie Wilkes adores. She is particularly fond of one of the characters called Misery, who Paul decides to kill in his latest edition. Even though Annie adores Paul’s work, he will not have him take Misery away from her. If you have watched the movie, this book will give you a much better version of the on-screen depiction and if you haven’t watched the movie, read the book before watching it. While reading the last few pages, I almost got run over by a bus (I don’t recommend reading it on public transport).

Written by the founder of the infamous tour company (Contiki) from down-under, Only Two Seat Left starts off with a story of a dreamer. A guy with an active mind and a passion for making his mark on the world. I don’t think John even realises his passion for travel, until the travel chooses him. I really enjoyed the first half of the book consisting of a story of a young man, trying to make it in the big smoke while being a world nomad. However, the second half of the book turned into my university syllabus with Sales and Marketing advice for companies. A good read, but not something I’ll ever go back to.

Us by David Nicholls

A romcom cake with family drama icing sprinkled with bad daddy jokes is the best summary for this gem. It is a story of Douglas and Connie, who’s marriage is falling apart but they’ve got a big Euro-trip planned with their teenage son Albie. Douglas is hoping that the trip with bring the family together, to Connie it’s the last goodbye and Albie would rather be anywhere but with his parents. There are moment in this book that I can completely relate to such as printed my itinerary and putting it in folders by destination, sitting with my son (one day) and pointing to the room where he was conceived. An intelligent and witty family travel adventure where irony is the punchline.

One thought on “Magic!”